Below you can read about the event. Pictures by Jill Gibbons and the articles written by Rob Atkins, Author and songwriter. 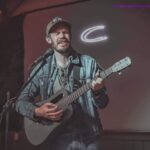 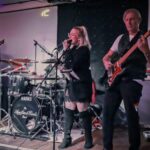 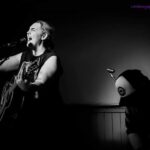 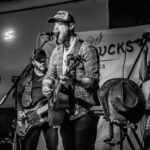 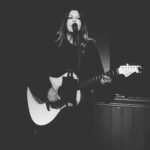 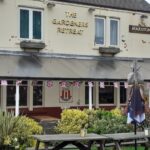 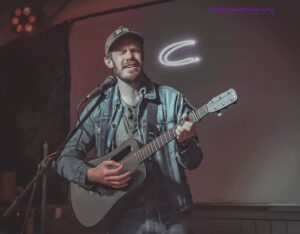 The unenviable and difficult task of opening act fell to the talented -but modest- Arron GC from Doncaster. Having introduced himself with a string of self-denigrating put-downs regarding his total unworthiness to appear at such an event, he belied all he had said by delivering a series of deftly-crafted examples of his original work.

The rapt audience was treated to a session of fine songs, encompassing subjects very relevant to the current climate of ‘bad news, the rising cost of living’ and other ‘working class angst’.

Two stand-out tracks for me, were BACK TO BUSINESS, which touches on the conflicting merits and demerits of city versus country, and HE DON’T LOVE YOU, a father’s advice regarding complications in the love life of an adolescent daughter. 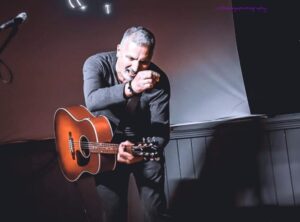 Hants-based city boy turned country boy, Paul Jupe, followed. I had heard him playing solo at last year’s festival, and was looking forward to see him on stage this year with his recently formed band. Sadly, illness had laid the guys low, and Paul turned up with just his guitar. Just his guitar? I had forgotten what Mr Jupe could do with that instrument! Seconds into the first number I had forgotten the absence of the missing musos too.

LATE NIGHT BY THE RIVER, a belter of a country rocker, taken from his HOME TOWN album, was hurled at the audience, as were CRAZY ABOUT YOU (from the same album) and the Steve Earle cover, COPPERHEAD ROAD.

More melodic numbers like the eponymous HOMETOWN, BEAUTIFUL DAY, and MY BRIDE (the latter telling of the trepidation experienced by a suitor about to propose marriage), were treated with equal élan, thus proving Jupe to be no one-trick pony. A power-packed killer of a gig for one guy with a guitar. 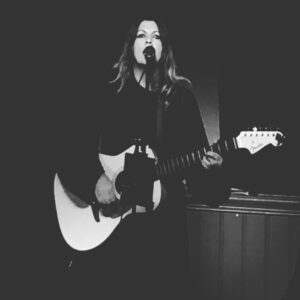 Bournemouth’s Helena Mace took the stage armed with her trademark white guitar, supported by her husband, Grant, on cajon and harmonica. Launching into BREAKING UP AINT EASY, an original number from her CHASING DREAMS album, she followed up with the poignant SAVE IT FOR ANOTHER DAY, and other self-penned songs from her UNBROKEN LP: SUNSET, and HOMETOWN. Something of a treat was SHIFTING SANDS, the first live playing of a track from her recently launched hit album, ECHOES. There was only one cover played in her set, the Chick’s smash, TRAVELLING SOLDIER.

Helena has achieved notable deserved success lately, not only by way of chart ratings, but through recognition of her services to ‘music and children’s charities’. It was obvious the audience loved her. 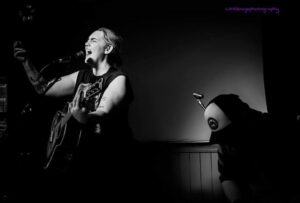 Next on was Birmingham’s Charlotte Young, accompanied by her drummer fiance, Scott Wesley on this occasion performing on cajon. Ms Young: singer, guitarist, and prolific songwriter, has been making quite a name for herself of late. Since, her debut single, WHIPLASH -along with its sister ep, BLOWN AWAY– reached number one spots in the UK Country Itunes Chart in 2020, she has been a constant presence on country radio stations world-wide and a favourite draw at live venues nationally, as well as in her native Brum. Tracks such as PRAYING FOR THE RAIN, HALF A BOTTLE, EARLY LIGHT, REMEDY, and PASSENGER SIDE, must be more than familiar to lovers of the genre.

Well-known for her big voice, thrashing guitar, and hard-hitting lyrics, Charlotte certainly brought the house down. From the opening chords of the first number to the final crash of the closing WHIPLASH, this feisty lady assaulted the crowd with the boisterous exuberance of her set, stunning them with the ‘rampage of raging hearts’ the ‘rage, anger, and sarcasm’ of REMEDY, and out-cashing Johnny Cash in the session’s only cover, FOLSOM PRISON BLUES: possibly the finest cover I’ve heard of this highly-covered classic from ‘The Man In Black? This was the music of Charlotte Young. Glorious Country Rock with a hell of an attitude! 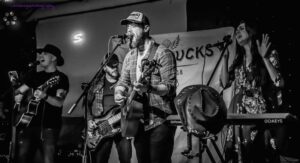 The Shucks from Bristol were the first of the evening’s band and they were here to deliver their own blend of Anglo-Saxon Americana -and it was our job to ‘shuckle our buckles’, and take a glimpse into ‘Shuck World’.

The music was mean, dark, moody, and dirty. Raw, belting bayou-flavoured rock, reminding an old timer like myself of The Outlaws, The Allman Brothers, Lynyrd Skynyrd, and Tony Joe White, at their heaviest and swampiest. I was beginning to feel quite nostalgic. For all this there was nothing hackneyed about the sounds this band was creating. The riffs were free of clichés, no cobwebs cluttered the bass lines, and the mellow organ tones and contralto harmonies that seeped through the guitar phrases and gruffer male vocals lifted the overall feel with brief interludes of the semi-ethereal -very rare in music of this nature.

Watching -but not performing with the band- was lyricist, Russell Beynon, the man who puts the words into the Shuck’s collective maw. Words, he told me, mainly inspired ‘by alcohol and bad things.’ Russell, although he doesn’t play an instrument, is very much considered a part of the band, and the respect they have for him was obvious by the banter exchanged between him and the guys on stage.

This is a core facet of Shuck philosophy: ‘good music, good food, good drink, good friends’. The band have three singles currently available: WE GOT THE MUSIC, RIDING LOW, and THE SHUCK LIFE. I look forward to the first EP. 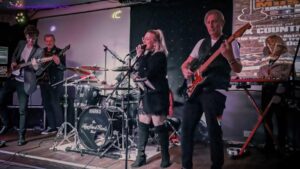 Evening headliners, The Heartland Roots Band entered the fest with an explosion of sound and energy. This slick six-piece from Leicester, with a dozen chart singles under their belts, two million world wide streams to their credit, and voted Group Of The Year in the UK Country Music Awards for both 2021 and 2022, took the place by storm in a hard-hitting set, tight and precise as always, melodic and articulate.

In the four years of their existence they have had more than their fair share of problems and upheavals to contend with but there was no trace of it in the pure joy and panache of their performance tonight (is there ever?). Most of the numbers featured were originals composed by Adie with occasional input from other band members. A random list includes GASOLINE, BREAKING AWAY, TAKE ME FOR GRANTED, DON’T GET ME WRONG, FEELING LUCKY TONIGHT.

Check them out online (where you’ll also find some high quality videos). This is a band you can’t get enough of.

Finally I think some praise for the venue and the festival organisers is called for. The Gardener’s Retreat is a great little pub that I’d recommend to anyone. Furthermore, the facilities it offers to hold such an event are tip-top.

Clap your hands together for Helena and Ken of CMSM for putting the whole thing together, and give a round of applause for Edward Lawton, landlord of the Retreat, for his stirling work with the sound and stage management.