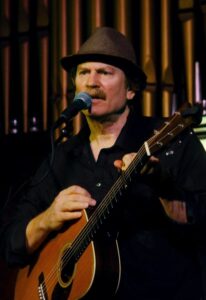 Rob McHale is a North Carolina Songwriter and Storyteller whose songs can take you through a small town, down a dirt road or on an historical journey – and bring you back home again.

Rob currently performs regionally, internationally, and select US cities, combining his stories and songs in an easy to understand presentation. In addition to performances with members his band, he performs solo.

Since 2017 he has told the Tom Dooley Legend at the grave of Laura Foster ( for whom Tom was hanged for murdering ) at sundown under candlelight at the Happy Valley Fiddler’s Convention, in the heart of Tom Dooley Country. Rob released a podcast ‘ The Real Tom Dooley Story ‘ on January 9th, 2020.

“Music of a hundred years ago, from yesterday or today – whenever you place them, the songs of Rob McHale should be taught in school, because they reflect vibrant history, the value of tradition and living social comment. This North Carolina-based poet, musician and composer writes folk Americana songs that walk you through their narratives in an entirely involving way. They bring home the wealth of heritage and place it firmly in the present, they observe the days we live in and offer valuable meaning.” Tom Franks, Folk Words Magazine, London

“On October 25, 2019 I was personally convinced of the power of his songs when I saw
him live” Wolfgang Geise, Music and Such Magazine, Berlin, Germany

“McHale wears the skins of his characters: his stories allow for the familiar to be felt as
an old friend and the unknown to become family by the end of the song.” Danny McCloskey, Editor, The Alternate Root Magazine, Palm Springs, CA

“Prophets on the Boulevard“ is definitely one of the best albums thus far in 2018, consistently
good from the first song to the last “ Ken Nagelberg, WHYR 96.9 FM, Baton Rouge, LA