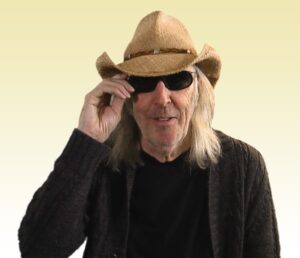 John Greene’s music is a reflection of his turbulent, non-conformist life and is based on early rock and roll, the pop explosion of the 1960s, the blues and Americana. Best described as ‘hard country’, it lives in the space also occupied by artists such as Neil Young and the Grateful Dead. Sometimes veering toward Hawaiiana, it always represents his unique viewpoint on the world he has lived in and the troubles we all share.

John was brought up in the grey 1950s in a small town in Cornwall, UK. Badly educated and repressed by Methodist parents, music provided the escape he needed, first through radio and records (Elvis, Ray Charles, Roy Orbison, The Beatles and The Beach Boys) and then into local bands. On leaving school at 17 he was forced into clerical work but after two years of tedium he left for London.

It was 1968, and he was quick to discover the wonderful world of that time: bands; drugs; The Roundhouse; Eel Pie Island; Europe; the first Glastonbury Fayre (where he played on the first Pyramid Stage and, in a moment of glamour, dug the toilets); Morocco; broken hearts and music, music, music…

In 1971, on the rebound from some love affair, he arrived at the door of the Rainbow Theatre looking for work, and within 2 weeks became the assistant stage manager. The place was run on the Bill Graham inspired lines of The Fillmores and he immediately connected with the California work ethic that was in place. It felt like coming home and he learned the backstage business fast; all the time soaking up the knowledge that proximity to great musicians can provide.

When the venue closed he was offered more work by the production company that came from its ashes: the Wings Over Europe tour, the Grateful Dead and Santana. The Santana crew especially befriended John and invited him to accompany them to San Francisco when the tour ended.

Four years in the USA followed – a blur of touring with Santana, the Dead, Boz Scaggs, New Riders of the Purple Sage, The Allman Brothers Band, Commander Cody, Steve Miller, The Tubes and many others. He got to see the whole country and fell in love with the West and California and Hawaii in particular, drinking in the music at every turn.

By the late seventies he had had enough. The adventurous spirit of the previous decade had dissipated and ‘business’ was the order of the day. While considering his options he found himself sitting near North Beach Marina in San Francisco one day, with a pad of paper and a pen and was surprised to realize he had written a song.

John rebelled again and decided to return to his roots in Cornwall.

The culture shock of the return to the UK was staggering. Everything was different: the weather; the people; the lack of adventure… but he stayed, married twice, had two children, sailed and set about applying all he had learned to the local music scene.

Times were hard in 1980s Britain and just surviving was difficult, but local band work and the selling of various self-taught skills kept the wolf from the door. Song-writing took a back seat for a long time due to the financial challenges of recording.

By the mid-1990s, a combination of improved fortunes and good luck led to John recording his first album ‘Gone West’; a collection of favourite songs learned on the road, recorded with a band of art students who would later gain fame as Derrero.

A second, this time mostly self-penned, album was released in 1998. Titled ‘All This’, it featured some of the best of the local musicians in Cornwall at the time.

A collection of country standards in a ‘train rhythm’ style, ‘It Takes a Train to Cry’, was released in 2018.

In the spirit of passing on the knowledge he has acquired, John also creates general home studio YouTube tutorials (Home Studio Workshop )

A ‘Best of’ album of re-masters of previously recorded songs was released in 2020 titled ‘This Is John Greene’. Another album, ‘Songwriter’ was also published that year featuring a collection of his original work.

This was followed in 2021 by another collection of personal favourites, this time in collaboration with John’s daughter Rosalie James, entitled ‘Crying Time Again’.

A succession of singles are available and a new album, ‘Hawaiiana’ was released in the summer.

In his spare time John watches sports, walks down to the sea, looks after his plants and small garden and complains about the Cornish weather.